We have sat here in Astoria, Oregon for the past few weeks stewing in the marina waiting for the northwest wind to exhaust herself. Tonight a 945 millibar low-pressure system will move in on the coast and join with another low and make some rain. If you lived here, all you would notice is that the last 2 days that have been so nice and sunny have once again given way to the gray skies, wind and rain.

The wind and rain mean much more for us. The change in the weather means that we will be able to sail up the coast rather than bash up the coast. Our next official stop will be in Port Angeles, Washington, with a possible stop in Neah Bay at the very northwestern tip of the continental United States. Marina-itis is a condition from which voyagers suffer when they have spent too much time in a marina. I have marina-itis bad. Last night we took the boat out for a short sea trial to make sure that she was rigged right. My symptoms seemed to be soothed as we ran up river against the ebb current making 2-3 knots over the ground (this means that the boat was probably sailing at 4-5 knots, but working against a 2-knot current). Sailing a cutter rig is a new experience, as we worked our way up river wing-and-wing, the advantages were obvious. As we short-tacked back down the river the difficulties became apparent.

The following is for those sail-minded folks, just skip if you’re not interested in the technical details of the rig.
The Yankee (a high-footed jib) is difficult to move through the slot between forestay and the innerstay, though the power of the rig on a reach and running is amazing, short tacking while on a beat is a challenge. Under Yankee and staysail alone, on a broad reach in 8-10 knots of wind the boat made 5 knots over the ground. This was at slack tide, so there was no tidal current adding or subtracting from our speed over the ground. Running upstream against a 2-knot current wing-and-wing we easily made 2-3 knots. All without the driving force of the main! 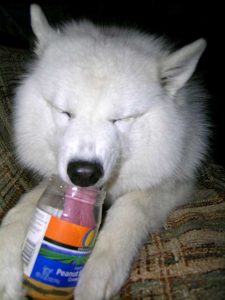 Nisa was an incredibly happy dog a few nights ago when we finished a jar of peanut butter and let her lick out the last bits. If I am to be totally honest, I leave a fair amount of last bits for her. I never really try to scrape out everything. Nisa seemed to think that sailing was ok. She was not very happy about all the hubalu of setting the sails, as there is a fair amount of flapping and slapping. Though once we got underway, she started to smile again and even wag her tail. Though the tail wagging was most likely a result of the dog biscuit that I was holding.

I have a plan to get her to love sailing. I am going to always have biscuits in my pocket when we go sailing. That way she will associate sailing with biscuits and think that sailing is great. Though I seriously doubt that there will be much work to do with Nisa, she seemed pretty happy about the whole situation.

The trip up the coast should be a very comfortable ride. The wind is predicted to blow from the south and southwest, meaning that Bluewater will be on her most comfortable point of sail for the whole trip. We will leave Astoria on the last part of the ebb tide (think of the ebb as the tide returning to the sea) arriving at the bar as the tide is at its slack low. By the time the tide turns, we will be out in the vast Pacific making our way offshore, then turning north for Cape Flattery.

The trip is just over 210 miles by the time we have gained the sea room that we need. It should take us 30 to 40 hours to sail up the coast. 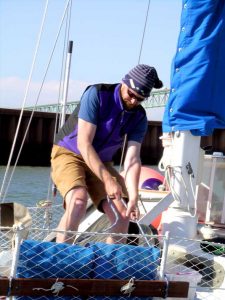 I was thinking about how Susanna and I are on the same trip but will have very different experiences. I look at leaving the marina and the narrow channel of the Columbia River with its strong tides and currents for the ocean with relief. Finally, we will be able to really sail the boat—to see how she handles and what she is capable of. I will not be worried about running aground on the shifting sands, the HUGE container ships that cruise down the channel at 15 knots and the various other obstructions of the river.

Susanna has never been to sea, is concerned that she will be seasick, has never sailed at night and never been out of sight of land. I have never met someone who stands up to the unknown like my wife. She is about to do something totally new, after having spent the last 6 weeks where each day brings something totally new and out of her realm of experience, she not only continues to smile and be a source of light and laughter, she is rarely if ever frustrated. The only thing that seems to get her (as it gets Nisa and me) is when it rains for several days in a row.

We are making our final preparations and discovering that just like the house, there is never a point where everything is done. It is just done enough and time to go.