Dock Side. Photo by Al Sharp.

We left our cozy little slip in the Multnomah Channel near Scappoose, Oregon Friday morning, May 19th. There is an old sailor’s superstition that a journey should not begin on a Friday. So we proclaimed that we were not really leaving, rather moving the boat to a new location. Our destination: 70 Miles downriver to Astoria, Oregon. The trip started with an exciting few moments. While backing from the slip the transmission control cable snapped as we entered the current, with no way to put the boat into gear, we drifted downriver 100 meters before we were able to drop the anchor and arrest our uncontrolled progress. We discovered two problems with the shifting system, which blossomed into four problems.

The first problem was the broken shift cable at the shifter end. The second was the distal end of the cable was no longer attached to the bulkhead. So there was no way to make the cable shift. Investigating the problem lead to the discovery that the shifting mechanism needed to be rebuilt.

Three hours later, we finished replacing the broken cable, rebuilding and lubricating the shifter and rebuilding and installing the distal mounting bracket. Which led us to the fourth problem, non-stainless hardware was used and thoroughly RUSTED — there was no way to repair this on the fly so off we went, thankful that Cliff, the previous owner, had filled the boat with every spare part that we could need.

With the shifter cable fixed and the hook back on deck, we headed downriver — way downriver. We anchored late in the evening, in the pitch black at the downstream end of Walker Island. Arriving in the dark made me ever grateful that we loaded to boat with 400 feet of 3/8 BBB chain attached to a 45-pound CQR (this anchor is the storm-sized hook for next size-class of boat). Anchoring in 30 feet of water with a 5:1 scope made for a very sound nights sleep.

The sleep was short lived. Dad and his wife were in Astoria so we awoke early and motored, motored fast. With the current of the lower Columbia River we reached speeds of 8+ knots. ZOOM ZOOM!

We arrived in Astoria at about 1:00 PM on Saturday, May 20th, under bright and sunny skies with a full breeze and an ebbing tide. One quick move through the gates of the West Mooring Basin and we arrived safe and sound. The weekend with my father and his wife was equally wonderful, if not rainy. 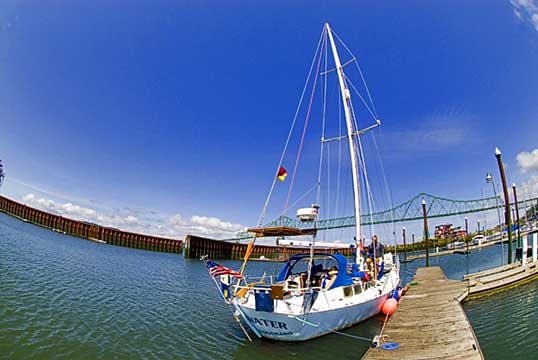 Did I mention the rain? Susanna is having a bit of a hard time adjusting to the fact that we have had only had one sunny day in the last 10. In that time we have made the final repairs to the boat and are getting ready for the first real sea trials. 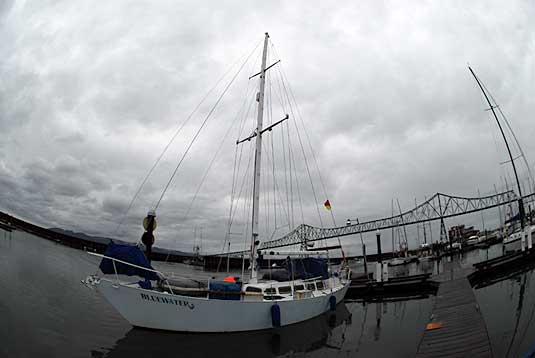 The final repairs to the boat include:

Seeing that list might lead you to think that we have been sitting on our asses. That is not the case at all. When working on a boat, everything takes five times longer. Though things are greatly eased by the fact that the world’s greatest marine store is a short five-minute walk from the boat.

When the current round of rain lets up, we plan to be out on daily sea trials and waiting for the right weather window to start heading north.