Sara on the beach – Photo by Michael Sharp

The country itself is grand. It’s so damn grand. It is so much grandeur that it is impossible to encapsulate that either in words or in a painting. I was overimpressed by it, and it is very hard to look at something with your mouth open and at the same time try to think in technical terms: how do you control this image, how do you present it? How do you compose it so that it is the most effective?
Karl E. Fortess, Artist
WPA Alaska Art Project

There are moments in life that are so perfect, that so stunningly summarize every instance that came before, that they make you pause, calmly let the perfection of the moment possess you, feel yourself smile at the balance of that second, and then move on to the next chapter, like savoring the last moments of a book, knowing that you’re coming to the end, eyes lingering on the last words. As you close the book, your fingers caress the page, and you shut it, and stare at the back cover, and smile, sad to see it end. And yet a sense of accomplishment and peace exists.

I stared up at the words introducing the photography exhibit in the Anchorage museum and let them roll through me like a voiceover as images of the last 10 days cycled like a flipbook in my mind’s eye: The precious calm settled over me, a sense of completion. For ten days, Jasun and I had sailed with Michael, Susanna, and Admiral Nisa on Bluewater, crossing Prince William Sound from Valdez to Whittier, and the experience was so big, so damn big, that even now, 6 months later, I find it difficult to bring it into focus. Alaska itself, immense, unforgiving, and yet nourishing in its ability to sustain life with an abundance of fish, berries, mussels, clams, and shrimp, seemed to me like the Old Testament diety â€“ harsh and unforgiving when crossed, appeased and accommodating when all the rules were followed. The sense that the edge of the universe was near, the sense that we were adventurers launching into an untouched world, was palpable, especially as we neared the middle of the Sound. And that sense of rustic endurance, intelligent self-reliance permeates the culture of the residents here. After ten days of watching Michael and Susanna battle harsh sailing conditions while simultaneously fighting their own flagging health, and yet also watching them laugh, joke, and make every effort to comfort and appease their guests, I understood why they felt so at home in Alaska. They embodied the spirit of this land and its surrounding waters long before they ever sailed North to its shores. Now, 6 months later, there are so many moments of our Alaskan adventure that I treasure. I remember squealing like an over-excited toddler when the dolphins escorted Bluewater through the waves, convinced that I would never see anything as magical as their sleek bodies darting intrepidly to and fro beneath the ship’s hull. I remember a field of iceburgs so blue that I illogically envisioned glacial flames burning brilliantly inside of them. I remember shivering delightedly after an ice-melt shower beneath a waterfall. And, as a seafood fanatic, I remember beds of muscles so thick that I thought, surely, I must have died on the Prince William crossing and gone to heaven.

Despite all of those moments, what stands out in my mind the most is Michael and Susanna’s hospitality and graciousness – not because they were trying to be polite, but because that’s just the kind of people that they are. Believe me, no one could keep up a polite facade for ten days on a boat when everyone was sick, but they diffused illness with laughter, watched out for our warmth and health even when they felt ill themselves, and cooked us food worthy of a Michelin Star. (For those of you who are uninitiated, Chez Sharp is a little-known five-star bistro that operates out of the Bluewater galley. If you happen to catch Bluewater in dock at any of the Alaskan ports of call, make sure that you convince its proprietors to cook up some of their famous steel cut oatmeal, complete with dried fruit, nuts, and a healthy dollop of brown sugar.)

Great food, great friends, great adventure – great enough that perhaps it’s ok to let the picture blur around the edges a bit, because bringing it into focus too much would sharpen the edges of the slate-shard beaches, unbalance my footfalls in the squelchy muskeg, and dampen my eyelashes with sea spray. Better, instead, to let the image’s grandeur exist and unfold and wrap around us, bittersweet for its haze and its distance.

To Michael, Susanna, and Admiral Nisa:
We love and miss you guys!
~Sara & Jasun 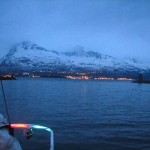 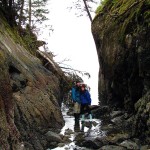 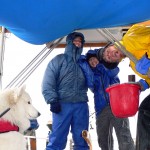 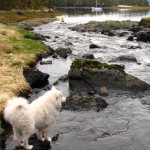 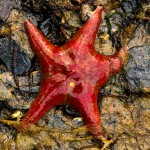 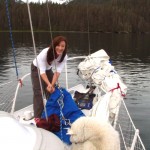 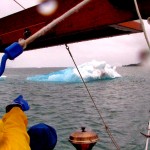 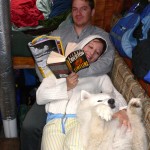 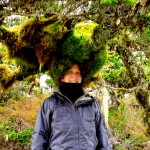 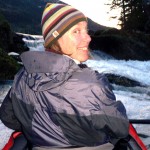 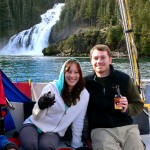 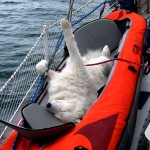 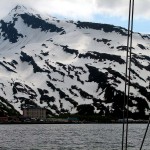 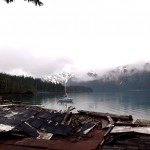 « More bananas! …see our new article in the November issue of BWS
The Short Day »