Thirty-Four, a magical number for the crew of s/v Bluewater, arbitrary and incredibly important, the countdown to the launch of Bluewater stands at 34 days. As the darkness of the Alaskan winter starts to fade into the bright light of the far north’s endless days of summer, we are ticking away at the tasks that will kick off another winding, wilderness voyage. 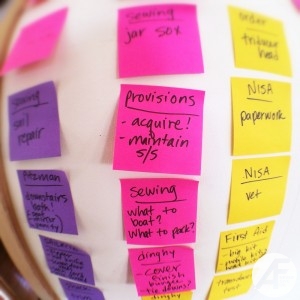 Thanks to s/v Delos for the scrum board idea!

The plan: To launch Bluewater in thirty-four days and shortly thereafter embark on another grand voyage. Close friends in the know might argue we are actually hundreds of days late; our plan had been to take off for the horizon of the new last SUMMER. Boat work and the relentless march of time conspired to close that departure window. Rather than rushing and fretting over nasty fall weather patterns we decided to stay put in Homer, Alaska, for one last winter.

Delaying our departure to the spring of 2014 has been a blessing. Michael had the chance to be in a nationally broadcast commercial that has paid for a nice bunch of bananas, and he completed his 100-Ton USCG Captain’s License. Susanna took a four-week welding class and is studying for her ham radio license.

Delaying our departure to this spring also allows us to visit some of the most spectacular places we passed by on our three-year, westbound voyage that began in 2006 and ended in the fall of 2008. The loose plan is to put Bluewater through a good shakedown in late March/early April and then head east along the Outer Coast toward Prince William Sound. There are hundreds of details to address, lots of packing to do and too many goodbyes to say before we leave, but for now we tick away at the list of tasks and consider how far we’ve come, all the things we’ve learned and the things we will learn in the coming months.

It’s good to be back.

« Oh My! Pulling Bluewater’s Mast
Where are all the recent updates? »